The Reliability of the Bible 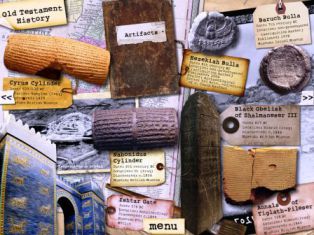 The excessive skepticism shown toward the Bible by important historical schools of the eighteenth and nineteenth centuries, certain phases of which still appear periodically, has been progressively discredited.  Discovery after discovery has established the accuracy of innumerable details, and has brought increased recognition to the value of the Bible as a source of history.[2]

Archaeology findings for the Reliability of the Old Testament:

On the whole such evidence as archaeology has afforded thus far, especially by providing additional and older manuscripts of the books of the Bible, strengthens our confidence in the accuracy with which the text has been transmitted through the centuries.[3]

With the discovery of the Dead Sea Scrolls, a number of O.T. manuscripts have been found which scholars date before the time of Christ….in order to see the uniqueness of the Scripture in its reliability, one needs to examine the extreme care in which the copyists transcribed the O.T. (MSS).[4] 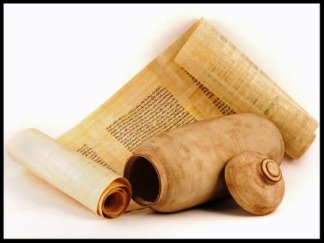 The Talmudists had quite an intricate system for transcribing synagogue scrolls.

Samuel Davidson describes some of the disciplines of the Talmudists in regard to the scriptures:

A synagogue roll must be written on the skins of clean animals….Every skin must contain a certain number of columns, equal throughout the entire codex.  The length of each column must not extend over, less than 48 or more than 60 lines; And the breadth must consist of thirty letters.  The whole copy must be first-lined; and if three words be written without a line, it is worthless….[5]

An authentic copy must be the exemplar, from which the transcriber ought not in the least deviate.  No word or letter, not even a yod, must be written from memory,…Between every consonant the space of a hair or thread must intervene; 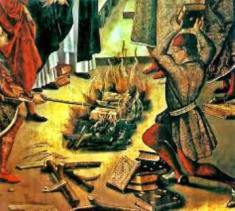 Why don’t we have more old MSS?  The very absence of ancient MSS, when the rules and accuracies of the copyists are considered, confirms the reliability of the copies we have today.[4]

Davidson adds that “the rolls in which these regulations are not observed are condemned to be buried in the ground or burned….”[5]

Even though the two copies of Isaiah discovered in Qumran (cave 1) near the Dead Sea in 1947 were a thousand years earlier than the oldest dated manuscript previously known (A.D. 980), they proved to be word-for-word identical with our standard Hebrew Bible….[6] 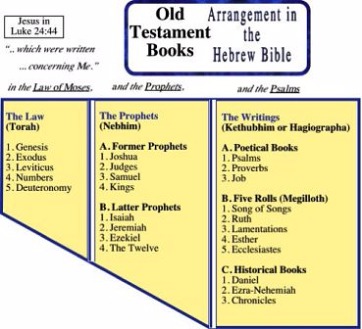 The Talmudists were so convinced that when they finished transcribing a MS they had an exact duplicate, that they would give the new copy equal authority.[7]

Sir Frederic Kenyon says: “Besides recording varieties of reading, tradition, or conjecture, the Massoretes undertook a number of calculations which do not enter into the ordinary sphere of textual criticism.  They numbered the verses, words, and letters of every book.  They calculated the middle word and the middle letter if each.  They enumerated verses which contained all the letters of the alphabet, or a certain number of them; and so on.”[8]

“These trivialities, as we may rightly consider them, had yet the effect of securing minute attention to the precise transmission of the text; and they are but an excessive manifestation of a respect for the sacred Scriptures which in itself deserves nothing but praise.  The Massoretes were indeed anxious that not one jot nor tittle, not one smallest letter nor one tiny part of a letter, of the Law should pass away or be lost.”[8] 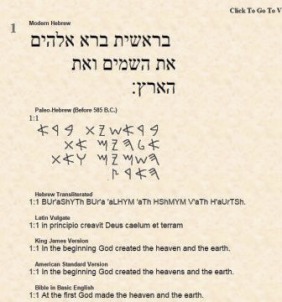 Robert Dick Wilson’s brilliant observations take the veracity and trustworthiness of Scriptures back to Old Testament times: “In 144 cases of transliteration from Egyptian, Assyrian, Babylonian and Moabite into Hebrew and in 40 cases of the opposite, or 184 in all, the evidence shows that for 2300 to 3900 years the text of the proper names in the Hebrew Bible has been transmitted with the most minute accuracy.  That the original scribes should have written them with such close conformity to correct philological principles is a wonderful proof of their thorough care and scholarship; further, that the Hebrew text should have been transmitted by copyists through so many centuries is a phenomenon unequaled in the history of literature.”[9]

Philological principles—Philology is the study of language in written historical sources; it is a combination of literary criticism, history, and linguistics.  It is more commonly defined as the study of literary texts and written records, the establishment of their authenticity and their original form, and the determination of their meaning.[10] 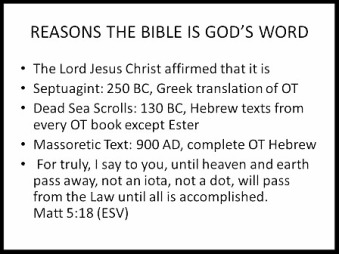 What are the Dead Sea Scrolls?  The scrolls are made up of some 40,000 inscribed fragments.  From these fragments more than 500 books have been reconstructed.  Many extra-biblical books and fragments were discovered that shed light on the religious community of Qumran….[11]

How were the Dead Sea Scrolls found?  In….1947 a Bedouin shepherd boy….was searching for a lost goat.  He tossed a stone into a hole in a cliff on the west side of the Dead Sea, about eight miles south of Jericho.  To his surprise he heard the sound of shattering pottery…. On the floor of the cave were several large jars containing leather scrolls, wrapped in linen cloth.  Because the jars were carefully sealed, the scrolls had been preserved in excellent condition for nearly 1,900 years.  (They were evidently placed there in A.D. 68) .[11]

….the acting director of the school at the moment was a young scholar named John Trever, who was also an excellent amateur photographer.  With arduous, dedicated labor he photographed each column of the great Isaiah scroll, which is 24 feet long and 10 inches high.  He developed the plates himself and sent a few prints by airmail to Dr. W.F. Albright of John Hopkins University, who was widely recognized as the dean of American biblical archaeologists.  By return 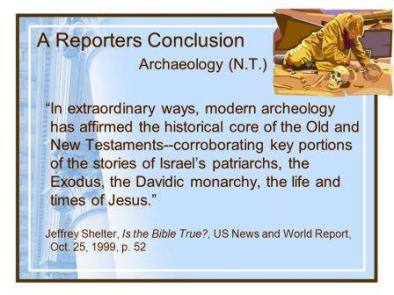 airmail Albright wrote: “My heartiest congratulations on the greatest manuscript discovery of modern times!....What an absolutely incredible find!  And there can happily not be the slightest doubt in the world about the genuineness of the manuscript.”  He dated it about 100 B.C.[12]

The Value of the Scrolls!  The oldest complete Hebrew MSS we possessed were from 900 A.D….How could we be sure of their accurate transmission since the time of Christ in 32 A.D.?  Thanks to archaeology and the Dead Sea Scrolls, we now know.  One of the scrolls found was a complete MS of the Hebrew text of Isaiah.  It is dated by paleographers around 125 B.C.[13]

The impact of this discovery is in the exactness of the Isaiah scroll (125 B.C.) with the Masoretic text of Isaiah (916 A.D.) ….[over] 1,000 years later.  This demonstrates the unusual accuracy of the copyists of the Scripture over a thousand-year period.[13]

Bibliographical Test for the Reliability of the New Testament:

The bibliographical test is an examination of the textual transmission by which documents reach us.  In other words, since we do not have the original documents, how reliable are the copies we have in regard to the number of manuscripts (MSS) and the time interval between the original and extant copy?[14]

S.E. Peters points out that "on the basis of manuscript tradition alone, the works that made up the Christian's New Testament were the most frequently copied and widely circulated books of antiquity."[15]

John Warwick Montgomery says that "to be skeptical of the resultant text of the New Testament books is to allow all of classical antiquity to slip into obscurity, for no documents of the ancient period are as well attested bibliographically as the New Testament."[16]

Attested— to bear witness to; certify; declare to be correct, true, or genuine; declare the truth of, in words or writing, especially affirm in an official capacity.[17]

A comparison of some great classical authors from their earliest writings to that of the existing Bible manuscripts.

Greenlee adds that "since scholars accept as generally trustworthy the writings of the ancient classics even though the earliest MSS were written so long after the original writings; and the number of extant MSS is in many instances so small, it is clear that the reliability of the text of the N.T. is likewise assured."[18]

Image #7: Jeffrey Shelter, (1999). A reporter's conclusion about the archaeology of the Bible. Retrieved from https://www.slideshare.net/oknishan/reliability-of-the-bible