III. The Truth about Angels 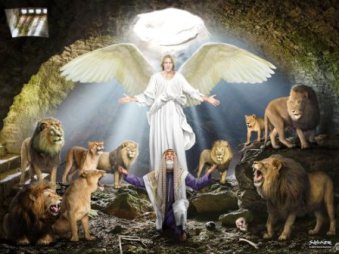 Before the creation of man, angels were in existence:

Job 38  (v. 4) Where were you when I laid the foundations of the earth? (v. 7) When the morning stars sang together, and all the sons of God shouted for joy?

Angels are sent on missions of mercy to the children of God....If God has granted to His children promise of grace and protection, it is because there are mighty agencies of evil to be met, agencies numerous, determined, and untiring, of whose malignity and power none can safely be ignorant or unheeding.[1]

In the beginning, all the angels were good and holy.

Evil spirits, in the beginning created sinless, were equal in nature, power, and glory with the holy beings that are now God’s messengers.  But fallen through sin, they are leagued together for the dishonor of God and the destruction of men.[1] 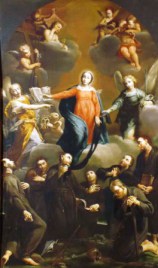 Heavenly angels assist us in the battle to save lost souls for Christ.

....we see the co-operation of heavenly agencies with human instrumentalities. We are taught that God is interested in every human being; that Christ died to redeem every soul, and that He communicates His will through heavenly intelligences....Heavenly angels watch those who are seeking for enlightenment.  They cooperate with those who try to win souls to Christ....every soul is precious in the sight of God, and that angels will bring to the appointed agencies light for those who are in need of it.[2]

The devil imposes a false dominion over the people of God who don’t really believe that demons exist in their lives.

II  Cor 11  (v. 3) But I fear, lest somehow, as the serpent deceived Eve by his craftiness, so your minds may be corrupted from the simplicity that is in Christ.

None are in greater danger from the influence of evil spirits than those who....deny the existence and agency of the devil and his angels.  So long as we are ignorant of their wiles, they have almost inconceivable advantage; many give heed to their suggestions while they suppose themselves to be following the dictates of their own wisdom....Satan is to work with greatest power to deceive and destroy, he spreads everywhere the belief that he does not exist.[3]

II  Cor 11  (v. 14) And no wonder! For satan himself transforms himself into an angel of light. 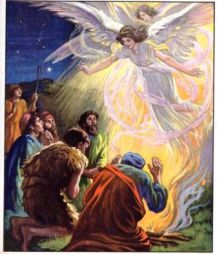 Angels desire to walk with God’s people, but many times they [christians] stray away from their guiding influences and seek the things of this world.

Angels of God are commissioned from heaven to guard the children of men, and yet they draw away from their restraining influences and go where they can have communication with evil angels; and then the evil angels fasten impressions in their minds....Oh, that we might all obey the injunction of the apostle (read 2 Corinthians 6:17, 18).[4]

We need to understand better than we do the mission of the angels.  It would be well to remember that every true child of God has the cooperation of heavenly beings.  Invisible armies of light and power attend the meek and lowly ones who believe and claim the promises of God.[5]

A guardian angel is appointed to every follower of Christ….The angels appointed to minister to the children of God have at all times access to His presence….These heavenly watchers shield the righteous from the power of the wicked one.  This satan himself recognized when he said: “Doth Job fear God for nought?”[6]

Job 1  (v. 9) So Satan answered the Lord and said, “Does Job fear God for nothing? (v. 10) Have You not made a hedge around him, around his household, and around all that he has on every side? You have blessed the work of his hands, and his possessions have increased in the land.

Thus God’s people, exposed to the deceptive power and unsleeping malice of the prince of darkness, and in conflict with all the forces of evil, are assured of the unceasing guardianship of heavenly angels.[6] 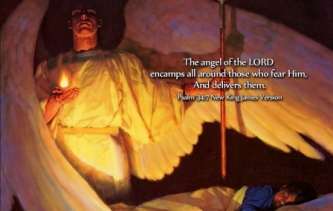 When heavenly intelligences see those who claim to be sons and daughters of God putting forth Christ-like efforts to help the erring, manifesting a tender, sympathetic spirit for the repentant and the fallen, angels press close to them, and bring to their remembrance the very words that will soothe and uplift the soul....[7]

Luke 15  (v. 7) I say to you that likewise there will be more joy in heaven over one sinner who repents than over ninety-nine just persons who need no repentance.

The truly converted man has no time to think or talk of the faults of others.  His lips are sanctified, and as God's faithful witness he testifies that the grace of Christ has transformed his heart.  He realizes that he can not afford to talk discouragement and unbelief; he can not afford to be harsh and faultfinding.  He has not received orders from God to punish the erring by heaping abuse upon them.[8]

My brethren and sisters, be afraid to find fault, afraid to talk against your fellow beings, lest you lose the sense that you are dedicated to the service of God, and that as a faithful servant you must keep his interests in view.  You are to live a life that will convince others that you are a child of God, under the training of the Captain of your salvation, that you may be prepared for active service.  You have enlisted to fight against Satan's forces, and you have no time to fight against your fellow soldiers.[8]

A look at what happens behind the scenes, when you are going through a temptation! 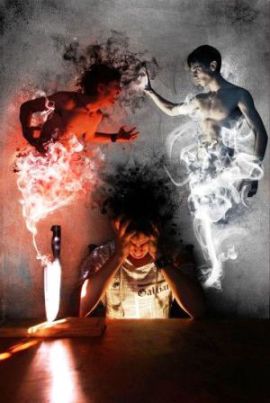 The Battle for Each Soul.   I saw evil angels contending for souls, and angels of God resisting them.  The conflict was severe.  Evil angels were crowding about them, corrupting the atmosphere with their poisonous influence, and stupefying their sensibilities.  Holy angels were anxiously watching these souls, and were waiting to drive back Satan's host.[9]

But it is not the work of good angels to control minds against the will of the individuals.  If they yield to the enemy, and make no effort to resist him, then the angels of God can do but little more than hold in check the host of Satan, that they should not destroy, until further light be given to those in peril, to move them to arouse and look to heaven for help.  Jesus will not commission holy angels to extricate those who make no effort to help themselves.[9]

If Satan sees he is in danger of losing one soul, he will exert himself to the utmost to keep that one.  And when the individual is aroused to his danger, and with distress and fervor, looks to Jesus for strength, Satan fears he shall lose a captive, and he calls a re-enforcement of his angels to hedge in the poor soul, and form a wall of darkness around him, that heaven's light may not reach him.[9]

But if the one in danger perseveres, and in helplessness and weakness casts himself upon the merits of the blood of Christ, Jesus listens to the earnest prayer of faith, and sends a re-enforcement of those angels which excel in strength to deliver him.[9]

Satan cannot endure to have his powerful rival appealed to, for he fears and trembles before His [Christ's] strength and majesty.  At the sound of fervent prayer, Satan's whole host trembles. . . . And when angels, all-powerful, clothed with the armory of heaven, come to the help of the fainting, pursued soul, Satan and his host fall back, well knowing that their battle is lost.[9]

Image #2: A year of prayer, (2011). Prayer Intentions: Turning from worldly offerings and focusing on the Lord. Retrieved from http://365rosaries.blogspot.com/2011/02/february-12-saint-buonfiglio-monaldi.html

Image #4: The Fellowship Site, (n.d.). The angel of the Lord encamps around those who fear Him. Retrieved from https://www.thefellowshipsite.org/psalm-347.html

Back To: Spiritual Warfare