III. The Truth about Demons

Demons are fallen angels.  They work for satan in the spiritual realm.  They travel unrestrictedly, but can only be in one place at a time.  They make intelligent plans, decisions, and communicate with each other to combine their forces against you.[1]

Demons are spirits.  They are invisible to the human eye, although they can manifest at times....They have an evil, wicked intelligence that seeks out bodies in which they can express themselves through.  They are emissaries sent from satan’s kingdom, possessing personalities and characteristics that make up an intelligent spirit being.[2] 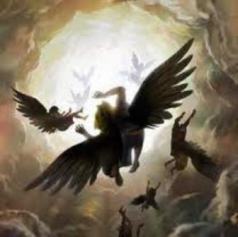 The Devil with his fallen angels........(Image #1)
Rev 12  (v. 7-9) And war broke out in heaven....and the dragon and his angels fought, but they did not prevail, nor was a place found for them in heaven any longer....the great dragon was cast out, that serpent of old, called the Devil and Satan....and his angels were cast out with him.

....“It is not mimic battles in which we are engaged.  We are waging a warfare upon   which hang eternal results.  We have unseen enemies to meet.  Evil angels are striving

for the dominion of every human being.[3]

Demons are spirits that have legal rights,[4] in the spiritual realm, to communicate with humans.[5]  They can interfere in human lives with either affliction or favor.[1]

When we become followers of Jesus, God puts a natural hedge of protection around our minds, but when we commit sin and do not repent, we break the hedge and open the door to demons....[they] can inhabit your flesh and live and operate in your soul and put pressure on your mind and emotions, until they are cast out in Jesus name.[6]

They put thoughts in your mind, but they cannot read your mind; however they know your habits.[1]

....not everything that pops into our heads is a prompting from the Lord.  There are three areas that these ideas spring from.  First, the Spirit of the Lord may prompt our thoughts.  Second, our own flesh, which is made up of our passions, appetites, and desires may be the source.  Last of all, we live in a world that has been tempted into rebellion against God by the devil and he is no less active in tempting us to sin than he was in any past generation.[7]

Eph 6  (v. 12) For we wrestle not against flesh and blood, but against principalities, against powers, against the rulers of the darkness of this world, against spiritual wickedness in high places.  [ KJV ]

....“Satan again counseled with his angels, and with bitter hatred against God's government told them that while he retained his power and authority upon earth their efforts must be tenfold stronger against the followers of Jesus. They had prevailed nothing against Christ but must overthrow His followers, if possible.[8] 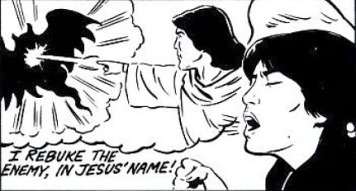 In every generation they must seek to ensnare those who would believe in Jesus.  He related to his angels that Jesus had given His disciples power to rebuke them and cast them out, and to heal those whom they should afflict. Then Satan's angels went forth like roaring lions, seeking to destroy the followers of Jesus.”[8]

Demons get their power from your fear and are masters of deception.[1]  They impose a false dominion against christians who do not know that they have authority over demons.  They use feelings to manipulate your actions and behaviors against other people.  Christians can rebuke them in Jesus name.

Reflect for a moment....what it means for Jesus to make us His representatives.  If you were to select a person to represent you such that the authority of your name could be used for any purpose, what level of confidence would you need to place in that person?[9]

I’ve thought about that many times, because it is like an ambassador....using the authority vested in his sovereign’s name....When we use the name of the Lord Jesus Christ, we are enjoying the same privileges, and operating under the same mandates, as that ambassador.[9]

Some people claim that Jesus only gave this rebuking power to his 12 disciples; but in the bible, it clearly states that other people "rebuked the enemy" in Jesus name!

Mark 9  (v. 38) Now John answered Him saying, "Teacher, we saw someone who does not follow us casting out demons in Your name, and we forbade him because he does not follow us." (v. 39) But Jesus said, "Do not forbid him, for no one who works a miracle in My name can soon afterward speak evil of Me. (v. 40) For he who is not against us is on our side."

And why is it possible for people to rebuke the enemy?  Because the name of Jesus is above all other names in the known galaxy.

Phil 2  (v. 9) Therefore God also has highly exalted Him and given Him the name which is above every name, (v. 10) that at the name of Jesus every knee should bow, of those in heaven, and of those on earth.... (v. 11) and that every tongue should confess that Jesus Christ is Lord, to the glory of God the Father.

Read about Dr. Peck’s conclusions with his encounter of demon possessed patients:

Satan cannot do evil except through a human body....Although it repeatedly threatened to kill the possessed and the   exorcists, its threats were empty.  Satan’s threats are always empty.  They are all lies.  In fact, the only power that satan

has is through human belief in its lies.  Both patients became possessed because they bought its false seductive promise

of “friendship.”  Possession was maintained because they believed its threats that they would die without it.  And the   possession was ended when both chose to believe its lies no longer but to transcend their fear by trust in the resurrected

We are taught to be afraid of them through watching TV and going to scary movies.  Who do you think is behind all of this?  I am talking about the pictures and the script of the actors, which leads innocent children to have nightmares and disturbing dreams.  Fear and deception are their primary weapons against you!! 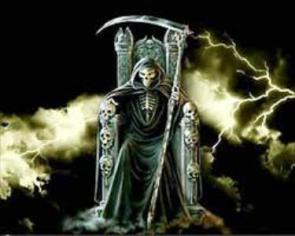 Demons use deception: They use lies and twisted truths of God’s word.  If a believer lacks knowledge of Biblical truth and doctrines, he can easily be deceived into doctrinal errors....[11]

Demons use fear: A believer lives in fear when he does not know or accept the written promises of God’s word.  A believer is to walk by faith and not by sight.  Most believers seem to put their trust in what the enemy says, rather than in what God has said.[11]

Demons are different sizes, vary in strengths, and have different degrees of wickedness.[1]   Their job is to keep you in sin and from having a personal relationship with the Lord Jesus Christ.[1]   They want to lead you on the path of doubt and unbelief!!

They are able to walk, hear, speak, see, obey or disobey, deceive, lie, seek out, think, and make decisions.  They can dwell in humans, as seen in the verse below:[2]

Matt 12  (v. 43) When an unclean spirit goes out of a man, he goes through dry places, seeking rest, and finds none. (v. 44) Then he says, “I will return to my house from which I came.” And when he comes, he finds it empty, swept, and put in order. (v. 45) Then he goes and takes with him seven other spirits more wicked than himself, and they enter and dwell there, and the last state of that man is worse than the first.  So shall it also be with this wicked generation.

Demons have the ability to actually enter into and live in people, like a parasite that lives inside of its host, and they must be rooted out and kicked out in Jesus Christ's name before they are able to complete their mission....[12]

What is their mission, you might ask?   Well, it is the same mission that their master gives them to complete!

In this verse, Jesus contrasts himself here with his adversaries; but there is a teaching among bible scholars today, which stress and prove that this is not really talking about the devil, but rather to Jesus’ opponents, the self-serving human leaders of Israel.  They take the focus off of the real issue and make it to be just about people; so leave the devil out of it!  My question is to whom was Jesus talking to in the following verse:

In nearly every instance, Christ addressed the demon as an intelligent entity, commanding him to come out of his victim and to torment him no more. The worshipers at Capernaum, beholding His mighty power, “were all amazed, and spake among themselves, saying, What a word is this! for with authority and power He commandeth the unclean spirits, and they come out.” Luke 4:36.[13]

The devil doesn't have to be everywhere to work out his purposes.  He is in charge of an entire army of demons that use and influence people's minds to complete their master's plans.  The real issue has always been about the "Great Controversy" between Christ and satan over the people of this earth, take a look at what the bible says in:

If you would like a copy of the book "Great Controversy" (click on this link).  And leave your mailing address in the (message box) of where to send the book at no charge.

The next verse implies that the name Michael is a reference to the Lord:

Jude 1  (v. 9) Yet Michael the archangel, in contending with the devil, when he disputed about the body of Moses, dared not bring against him a reviling accusation, but said, “The Lord rebuke you!”

So whether you know it or not, planet Earth is in the middle of a great war for the control of our minds.

Behind all wars ever waged on this planet, the greatest war of them all, rages on, all but unreported on Earth.  This war, this great controversy, this cosmic conflict, continues around the clock as we work, play, sleep, and eat here on Earth.  It continues even as you read these words.  What you may not realize is that this great War Behind All Wars is about you!  It is a desperate struggle between the true Ruler of the universe and an archrival determined to steal the throne.  It is an all-out battle for our loyalties and allegiance.  Whether you realize it or not, whether you choose it or not, you cannot escape personal involvement in this War Behind All Wars.  In the countless choices you make every day, you throw your support to one or the other of the two great contenders in this universal war.[14]

As long as the great war continues, the devil will still use his demons to attack our minds:

They demonize, or dwell, in a body to accomplish their evil purposes.  Every demon has a certain function and mission, which one can learn to recognize by the fruit it bears or manifests in the victim.[15]

Back to: Spiritual Warfare

For more information about this topic, contact any of these free deliverance ministries: