God created all men "in Adam"

The method that God chose to create us "in Adam" was called Biblical Solidarity, which means "the many in one" the concept that all mankind constitutes or shares a common life.[1]

The bible describes in the book of Acts where the whole human race shares a common life with Adam.

Genesis 2 tells us about the creation of Adam.  There is something that is not in our Bibles but it is in the original....

(v. 7) ....and breathed into his nostrils the breath of life ( the Hebrew original is Lives ) not singular but plural; and man became a living soul (being).[2]

So, the breath of “lives” is what God gave to Adam when He created him in the beginning.  Notice that God did not have to intervene anymore after Adam became a living being and started to produce children.

It is crucial that we understand that the human race today is the multiplication of Adam’s one life which was the corporate life of the human race....God created all men in one man.[2]

The following illustration further explains "Biblical Solidarity" during the creation of Adam. 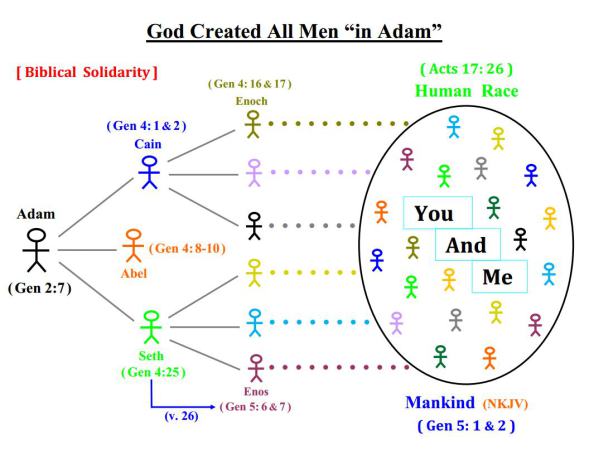 Notice in the beginning with Adam, we see only one person being created!!

Gen 2  (v. 7) And the Lord God formed man of the dust of the ground, and breathed into his nostrils the breath of life; and man became a living soul or being.

But listen to what God says, about what He just created!!

When God created Adam, He called him mankind; not as one individual, but as the "many in one" you and me, the whole human race.

Even science has their own name for this: Homo Sapiens–every individual of every race makes up one species.[5]

Then why do we die, because of Adam’s sin?  It is not because Adam’s guilt is transferred to us but because we were implicated....in his sin.  Remember that God did not create us when our mother’s conceived us.  God created all men in one man....Because of our position in Adam, we all belong to death row because we, “in him,” participated in his sin.[6]

From the sons of Adam, each generation having sons and daughters, and multiplying the human race up until our time today.  So, that is how God created all men "in Adam."

Also notice, how the bloodline abruptly ends with Abel; since he doesn't contribute at all to mankind.

Gen 4  (v. 8) Now Cain talked with Abel his brother; and it came to pass, when they were in the field, that Cain rose against Abel his brother and killed him. (v. 9) Then the Lord said to Cain, “Where is Abel your brother?”  And he said, “I do not know.  Am I my brother’s keeper?” (v. 10) And He said, “What have you done?  The voice of your brother’s blood cries out to Me from the ground.”

2. Vineyard Ministries. “The In Christ Motif” Tape 7B. The Gospel in a Nutshell, Audiocassette.

6. Vineyard Ministries. “The Two Adams” Tape 6B. Romans, The Clearest Gospel of All. Audiocassette.