Starting out with a brie​f history of the region:

A while back in 1971 Idi Amin took control of Uganda by force.  Being a Muslim, he reversed Uganda’s friendly relations with Israel and sought closer ties with Libya and the Palestinians.[1]  Ruling directly, Amin soon revealed himself as an extreme nationalist and tyrant.  He is believed to have been responsible for the murder of as many as 300,000 Ugandans, though he never stood trial for his crimes.[1] 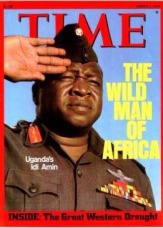 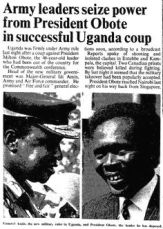 During the 1970s many Christians were persecuted in Africa....reading the reports of a missionary who was deported from Uganda to Ethiopia by the government:

In 1972, my family and I had the "privilege" of being deported from Uganda by Idi Amin.  I say "privilege" because the other alternative was to be put into a concentration camp and be shot.  When we left, we lost everything.  Idi Amin would not allow us to even touch our bank account....We were sent to Uganda by the brethren and deported from Uganda to Ethiopia by the government....We arrived in 1973 and....One year later....We had the Marxist Revolution.[3] 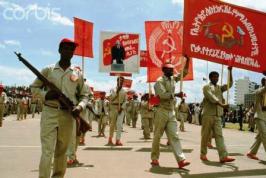 The Ethiopian Civil War (1974-1991) began on September 12, 1974, when the Marxist Derg staged a coup d'état against Emperor Haile Selassie, and lasted until the Ethiopian People's Revolutionary Democratic Front (EPRDF), a coalition of rebel groups, overthrew the government in 1991.[2]  Tens of thousands of those who opposed the Derg were executed and imprisoned tens of thousands without trial.  While it fought this and other wars, upwards of a million people starved to death.[2]

Continuing with the reports from this missionary who was now stationed in Ethiopia:

The Communist government....closed down all schools from tenth grade to university for two years....They took the young people and put them in camps of 150 and brainwashed them on this atheistic, Marxist philosophy.  During those two years, we had about 8,000 youth in those camps.  They could not pray openly; they could not read their Bibles; they could not go to church and they were forced to work on the Sabbath.[3]

To make matters worse they had to raise their left arm and shout slogans.  Two of them in English were, “God is an imposter”—“Christ is a devil.”  Anyone who disobeyed was either shot or stoned to death.  I knew of only one student out of the approximately 8,000 who was willing to die for Christ....it disturbed me that we had failed to prepare our young people for the crisis.  The older people were no better....I asked myself, “Where did we go wrong?”  I discovered that these young people knew Bible doctrines but they were not established on the Rock, Jesus Christ.  They had no assurance of salvation, therefore, they had nothing to die for.[3]

To help people with establishing thems​elves on “the Rock, Jesus Christ” you can goto the website tabs: “How–You Are Saved” and the other one, which covers the love of God, “Why–You Are Saved” (click on the links).

That was the obvious conclusion:  “They had no assurance of salvation; therefore, they had nothing to die for.”

When dealing with why we behave, concerning the end times, one must understand that there are two different issues that we need to consider.  They both are often confused to be the same issue, but they are really separate issues.  The first one is how we view our salvation; and the second one is how we view our reward.  The christian needs to know, that while good works do not contribute to your salvation, it does contribute to your reward “given” to you in heaven!!

For more detailed information about the differences between these two issues, you can goto the website tab: “Our Title to heaven and Our Fitness for heaven” where page 3 of 9 discusses “Your Reward given to you in heaven” (click on the link to go there).  And the real issue that we should be focusing on while we are here on this Earth, instead of trying hard to be good enough to make it to heaven, is the issue of “character development” (click on this link) to goto page 4 of 9: Working on character development, in the same module.

Many christians struggle with this and live in fear when the following verse is stated:

During the time of trouble, if you have no assurance of salvation, then you will fold and give into the anti-Christ power, this includes denying Christ.

So in this module we are going to discuss the issue that is depriving christians of their assurance of salvation, by comparing the main factors of the 3 gospels which are going around in the churches.

Yes, I have discovered that there are several gospels being preached today in our churches; but when you boil the issues down to the core, there are really only 3 gospels out there!

In our comparison, I want to take a look at a quote that is commonly stated:

We need to stop sinning before Jesus returns!!

This is the type of trick question that the devil loves to get us focused on!!  Because, however you answer it, you are wrong!!

Our focus should be on Christ and not of looking at our performance.

Back To: Other Topics
The Two Counterfeits

3. Vineyard Ministries. “Righteousness of God” Tape 1. The Gospel in a Nutshell, Audiocassette.