Mystery of the Rapture

We will start out our discussion, with an overview of the "secret rapture" doctrine that is being taught in today's churches.  Then compare each phase as they explain it, to what scripture actually says.  Note: below is a picture of their two-phase coming of Christ and a list of the highlights in order of their appearing. 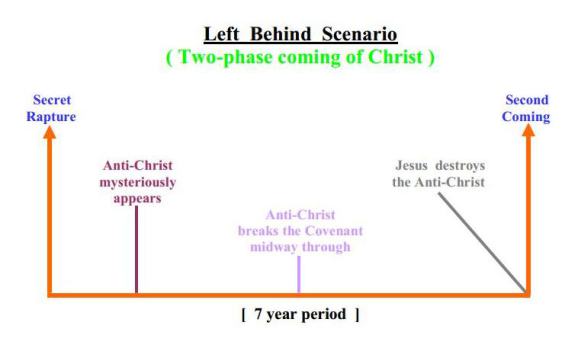 1)  Jesus comes secretly at the beginning of this 7 year period.

2)  The anti-christ mysteriously appears during this period just after        Jesus leaves.

3)  The anti-christ makes a Pact-Covenant with the nation of Israel and then breaks it midway through.

4)  Then those who want to exercise their 2nd chance, become loyal to       Christ and suffer persecution.

5)  Jesus comes back and destroys the Anti-Christ, then takes the 2nd      group of believers to heaven.

The "secret rapture" group teaches: that the ones "taken" goes to heaven; and the ones "left" behind were not ready when Jesus comes, but supposedly gets a 2nd chance.

Now, let us compare that verse with what Jesus teaches in the book of Mathew!!

So, the example about the days of Noah, is used to explain how the coming of Jesus will be.  Notice who was "taken" and "left" behind is this bible passage.

Matt 24  (v. 38) For as in the days before the flood, they were eating and drinking, marrying and giving in marriage, until the day that Noah entered the ark, (v. 39) and did not know until the flood came and took them all away, so also will the coming of the Son of Man be.

The following is a table which presents clearly the differences between the two view points:

The secret rapture theory seems to be the opposite of what the bible says!!  Next, we will look at each of the five (5) highlights of events noted above, in comparison to the light of the bible.

Back To: Other Topics
Secret Rapture: Event #1